Do you have somewhere to live? Is it big enough for your needs? Is it possible to keep it clean, properly heated and ventilated? Is it a pleasant retreat after a hard day? Is your tenure secure – can you stay there for as long as you like?

Congratulations if you can answer ‘yes’ to those questions. Many people can’t. Fifty years on from ‘Cathy Come Home’, the Ken Loach Play For Today that outraged a nation at the scale and consequences of the housing crisis, indeed, fifty years on from the founding of the pressure group Shelter, we face another crisis that is arguably much worse.

The mid-1960s was a time which had seen 100,000 -250,000 social houses built per year for the previous decade and more. Moreover, there were quality standards for social housing to ensure that they were spacious and designed for modern life  (some were also badly constructed, but that’s another story). Housing quality in the private rented sector was often poor then (as now) – see Alan Johnson’s memoir of growing up in Notting Hill for the grim details – but a much poorer country still made the effort to address housing need regardless of which party was in power.

But what do I know about housing policy? Just what I read in newspapers. This is about what I see with my own eyes all around me.

There are posters on buses with helplines to call if there are rats infesting your rented home. Lawyers touting for business if your landlord is intimidating you. I see council estates like the one I used to live on now a foul mess of buy-to-let greed and public misery.   And then there are the people who live on the streets. 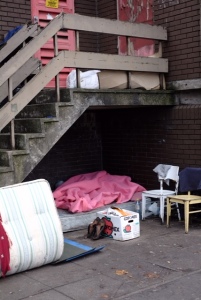 This is a home in a British city. I first started noticing these homes when I was stuck in traffic on the top deck of a bus. They are tucked in odd, slightly sheltered corners, like the nooks inside flyovers, or under bridges.  I call them homes, because people live in them.

I began writing this post whilst sitting in a pleasant cafe. I was a bit annoyed at being asked to leave, as they were getting ready for a private reception. As I walked out, they were putting out the champagne glasses and trays of canapés. I know someone who had been invited to that reception. He took the photograph above.

Out on the street it was the city rush hour. People hurrying past heading for the train station, or to buy a ready meal from M&S. Not rushing were two men, curled up, head to bottom across a doorway, trying to sleep.  Outside M&S, in his usual place, squatting on the pavement, was the usual man with a biblical look about him, begging for coins. He looks to me like a failed asylum seeker (such people are destitute). I know I should ask him why he’s there, but I don’t.

Back in my pleasant suburb, one of the few places outside London where quite ordinary looking houses on normal streets can sell for a million pounds and more, the street people are also visible.  The Big Issue seller who had a pitch outside Waitrose died recently, and the store put up a memorial to him, with many staff attending his funeral, but his place has already been taken. A man wrapped in a blanket pleaded for small change.  The guy who looks like a ‘tramp’ from my childhood, wild haired, bearded, went on his rounds, obsessively picking up litter. He sleeps between the menswear store and the travel agent not far from a restaurant with a Michelin star. This is Britain today.

Am I alone in seeing these things? And in feeling outraged by them? I suspect that many people don’t see. Cocooned in cars, in ‘executive’ homes in the outer suburbs or in the commuter villages, why would they see?  Yet others have grown used to the sight of people wandering, with nowhere safe to lay down for the night, who are perhaps unaware of the time, not so long ago, when we thought that living in a civilised country meant not putting up with such cruelty.

Will there be a revolt against the resurgence of private affluence and public squalor?