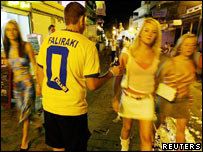 Each new day, each new absurdity. Michael Howard wants to start a fight. Mickey Gove’s missus is trying to get Theresa and Nicola into a wet T shirt competition. Dominic Raab is blubbing in the corner because Hilary Benn (yes, that well-known bully boy) is being nasty to him, cruelly demanding facts, and evidence, and contingency planning, FFS! It’s as though British politics (or is it just Brexit politics?) has gone off for a couple of weeks in Faliraki for a compulsory sex and substance abuse party, but, alas, has managed to spend nine months there, and counting. The Brits and Europe – it never ends well.

It’d be all too easy to extend this metaphor. After all, Lord Howard really is shouting, “Fight! Fight!” We can remember the unpleasant image Arron Banks proudly shared with the Today programme of he and Nigel skinny dipping after a night of binge drinking. We’ve seen their selfies from that ghastly club with the tacky gold elevators. Fat Boris waddling around in his pants, having his cake, and eating it. Spivvy Fox trying to flog timeshares in a half-built abattoir. Don’t look too closely down that alleyway. There’s probably a teenaged refugee lying in a pool of his own blood at the end of it. Yes, welcome to Theresa May’s Brexit Party! It’s cheap, it’s nasty, it’s abusive. Suck it up!

It’s a doddle to riff on this theme. So it’s time to stop. Let’s take a stone, cold, sober paramedic’s eye view of the Mayhem. For these people govern us.

Think about that. They rule. Real, live proper rule. Making laws, making decisions, making us pay for them. Henry VIII powers, even. David Davis gets to star in Game of Thrones! “Die!” he cries, raising his sword at the Monstrous Merkel. But only when he’s looking in the mirror. Because we are the ones who will pay for this destructive, wasteful, delusion.

This is the real story of Brexit, as stripped down as I can manage.

There was a country which had once had an Empire. Some people, especially those who identified with nostalgic, right-wing politics, could never get over the loss of that Empire. They felt it as a personal sleight. It was a wound that wouldn’t heal. They wouldn’t let it, forever scratching away at the scab.

Someone was to blame for the loss of Empire. And they had to pay.

Of course, there are a few Brexiters who don’t see it primarily as a grudge match with the foreigners who stole our glory. The hedge-fundy, citizens of nowhere, non-doms who run our newspapers, and licence a few young Robespierres, like Daniel Hannan. People for whom chaos, destruction, upending things for the sake of it, offers them a chance to test their free market theories to destruction, whilst making a quick buck, or billions of bucks. Everything creates value for someone (that’s the phrase they use for larceny that you can get away with).

So now, they are getting their prize. Or at least, they would be, if doing stuff in the real world was as easy as making up pleasing narratives and writing them on the side of a bus.

For the Brextremists don’t know what they want, and don’t know how to get it, as the Brexiters’ favourite band once almost put it in their prophetic song, Anarchy In The UK.

There has been no planning. No best case plan, no realistic negotiating position, no fall-back, contingency planning, no consideration whatsoever of the worst case scenarios (of which there are many).  David Davis, the man in charge, said as much to Benn’s Select Committee.

And yet, you may say, the Tories are riding high in the opinion polls – much higher than most mid-term governments. They face little effective opposition. The media is either on their side, or under their thumb. So much is true.

But the odds are, it is being done, as was the whole Brexit campaign, with smoke and mirrors. The unchallenged governing party has a dwindling membership, and its billionaire one-time backers are now backing off. The ‘party of business’ is becoming the party of whinging nobodies; a joke in seriously monied circles. Brexit’s triumph is built on unstable, crumbling, foundations. Which isn’t necessarily any comfort to those of us who always said that this was mass delusion.

So that is where we are. The Brextremists will continue to lash out, the economy will continue to splutter along on the consumer spending of people who don’t know, or don’t want to think about, how bad things are, and the downward spiral will continue.

One thought on “Brexit In Faliraki”