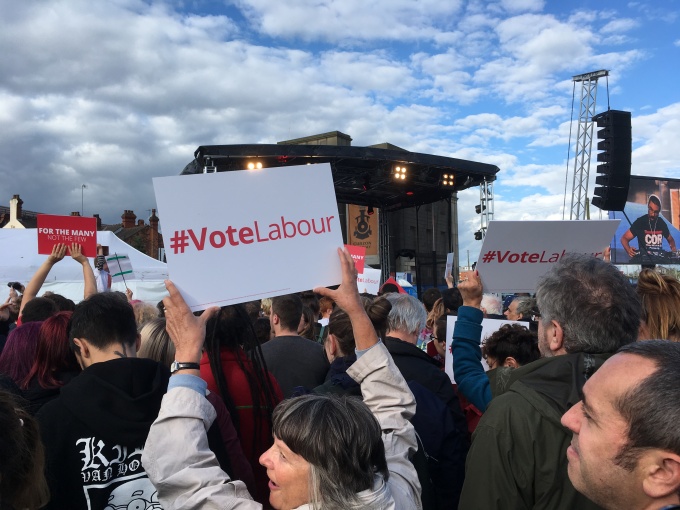 Successful political parties have to have a purpose, and a constituency whose interests they represent.  Having shedloads of money can help to keep awkward questions at bay, but not for ever. Democracy’s a bit of a bastard like that – you can’t fool all of the people, all of the time.

Which brings us to the unholy mess that is British politics as we near the end of 2017. Omnishambles doesn’t cover it.  Malcolm Tucker is a mild mannered sweetie, temperamentally unsuited to our demented times. Alastair Campbell has morphed into the voice of reason.  For these are the End Times.

The total shitstorm, tidal wave, asteroid hit, sink hole, forest fire, flood, drought and zombie apocalypse through which we are living was made by the Conservative and Unionist Party.  Our dire, and deteriorating, position as a nation has its roots in, and its shape defined, by the decisions taken by the Tories.  The party used to look like a winner, a ‘natural party of government’, a shrewd player of the national mood, able to adapt to all the twists and turns of history in order to survive.  A party of aristocrats, firmly opposed to democracy, it invented modern political campaigning and the mass membership party.  Opposed to votes for women, it gave us the first and second women Prime Ministers.  Condemning the socialisation of medicine that was the NHS was quickly followed by the embrace of that institution. It seemed like the party of brilliant reinvention, nimbly able to own the zeitgeist.

It doesn’t feel like that now.  John Smith, Labour’s lost PM, mocked John Major’s government as one in which everything went wrong, from villages slipping into the sea, to the Grand National descending into farce.  But Major won an election when he was expected to lose, and carried on for a full term with his dignity intact.  This is much, much worse, and its quite hard to see how they escape from the mess.

The Tories have a small, elderly membership who lack the capacity for activism.  Their voter base is dying. Their purpose – other than to dread and fear Corbyn’s Labour Party – is hard to ascertain.  It certainly isn’t their purpose to deliver Brexit, because they still don’t know what it is, nor how to get it.  They don’t represent industry, they don’t even represent banking, maybe they represent some hedge funds, but that’s hardly a message to woo the electorate.  They’re a busted flush, dying before our eyes, and doing their damnedest to take the rest of the country down with them, the frightened, idiotic cowards.

But Labour.  Surely they’re in a similar mess?  The narrative of their opponents is that the party is a party of Remain, led by Eurosceptics, with a voter base which is dying a different kind of death – as Northern Leave voters wedded to industries that have gone, or are on their way out.  Contradictions all round.

Except that its not rue.  I remember writing, in 1997, that Blair’s Labour campaigned in denial of its own supporters.  They seemed to hold the Northern industrial working class – the “white working class” as some Westminster-bubbleists put it – at arms length, unwilling to be too closely associated with them and their curious ways.  A no doubt apocryphal story was that Peter Mandelson, taken to a chippy in Hartlepool, mistook mushy peas for guacamole. The story stuck, because true or not, it encapsulated an attitude.

Blair’s party also used iron control to ensure that certain kinds of black, and, particularly, Asian PPCs were not selected, mainly because they were, and looked and sounded working class, or “too black”, or “too Asian”.  The nervous Blairites wanted a party that looked and sounded youngish, metropolitan, and breezily ‘classless’ in the manner of the upwardly mobile graduates in their advance guard.

It was a neat trick to pull off at the time – but it was a trick.  They got small town, socially conservative, working class people to vote for an urban, middle class party.

Twenty years on, and small town, declining, ageing, working class areas that used to be the Labour heartlands, are Brexity places, hostile to immigrants, and receptive to, if still suspicious of Theresa May’s tall tales of ‘caring’ for the ‘just about managing’, and the ‘left behinds’.  The 2017 election gave Labour too little to be complacent about in those areas, even where they remain in the nervous hands of Labour MPs.

But 2017 showed that Corbyn was making Labour the party Blair had always wanted it to be – young, urban, educated, socially liberal.  Labour piled up voters, and new members, in the growing cities.  Its constituency, and its activist base, lies in exactly the demographic which alone can make Britain a successful country in the years ahead.  It’s in these hands – the massed ranks of the city-dwelling, first-graduates-in-the-family, articulate precariat – that both the party and the country’s future lies.

The Tories have reason to fear that their condition is terminal.  Labour ought to be more confident.  And finding a way to remove the spectre of Brexit is the key to their historic mission.  To finish off the Tory Party which has brought this country to the edge of ruin.

One thought on “Jeremy Corbyn Is A Blairite”