Why was yesterday’s People’s Vote such a happy event?  Had the BBC bothered to cover it properly, they could have sent their new Royal Correspondent to describe the cheerful procession, the eye-catching costumes, the mother and daughter duos with their witty placards, the dog walkers, and buggy pushers, and all the slightly scrappy homespun razzamatazz of the British in party mood.  Who’d have thought we were protesting about  the gravest crisis in British political and economic life in more than 70 years?

Make no mistake, the exhilaration of the mood was due neither to unseasonably warm weather, nor to a failure to grasp the seriousness of the imminent catastrophe of Brexit. The people who marched, from all corners of Britain, hadn’t been mobilised by slick campaigns, or by organisations with deep roots and an ability to ‘get out a crowd’.  Every adult who marched had made their own commitment to the cause, had mostly foregone a Saturday lie-in, and had paid their own costs to get there.  This was a march which could never be dismissed as a ‘rentamob’.

There is no point rehearsing once again the reasons why Brexit is a trail of errors, snowballing onward towards a cliff edge; a campaign of lies led by spivs and chancers; a giant confidence trick, probably aided by foreign interests, possibly using illegal means.  This is all a matter of record, however much pressure is piled onto the Metropolitan Police to refrain from a criminal investigation into the cheating cheaters who are  laughing into their off-shore swill buckets.  Take it as read – Brexit Means Toxic.

So was our joy on the march due to that well known psychological phenomenon whereby people who ‘will’ themselves to die reach a stage shortly before death of perfect bliss?

I don’t think so.  Many of the conversations I had, or which I overheard,  as well as the clever and pointed placards and banners, most of them home made, were tentative, questioning, puzzled, even.  What was really happening?  Where was the country heading?  Could a People’s Vote actually happen, and if it did, what might be the result – not just of the vote, but of the aftermath.  These were conversations which were hesitant,  yet also somehow conscious that this is a time of profound change, where nothing can ever be the same again, and where the solid political ground of the past is dissolving before our eyes.   Yet the shape of whatever will emerge is not yet visible.  Unsettling, yes, but energising too.

That energy comes from a sense that this thing, ‘Brexit’, that has diseased our politics and riven our society, is a plague that must and will burn itself out, leaving nothing substantial behind.  It has no vision, no programme, no policies, no strategies, and its advocates stand before us, naked and ridiculous, if, still, clinging to power.

Which brings me to two questions that must be addressed by our side.

The first question is, who are we? In a strangely convoluted Twitter thread yesterday,  former journalist-turned-Corbyn cheerleader, Paul Mason, wrote,

“A warning. If 17 m voters see Brexit overturned + blame the socio-economic group dominant yesterday we will see marches 2x that big and they will be a lot less pleasant..”

The bit of that I want to focus on first, is “the socio-economic group dominated yesterday”.  What, exactly is that ‘group’?

I wasn’t in any position to poll them, set-up a focus group, or hand out questionnaires, alas (I’m a woman, not a think tank). They seemed more white than the general population, and ‘middle class’ (which, if you crunch the numbers, is also a description of the bedrock of Brexit support).  It’s important to take the concept of class seriously, probably more seriously than the categories used by pollsters, and lazily recycled by journalists and commentators into phrases like ‘middle class’, or ‘white working class’. Insofar as one could discern anything, they seemed to reflect the divisions of our times, with older, retired people materially secure and comfortable, and those of working age increasingly precarious, even where their educational levels were high.  That they were mostly city dwellers seems to be the key distinction.

I can’t share the demonisation of 17 million Leave voters, even if I recognise a certain truth in the ‘wall of gammon’ stereotype of those ‘members of the public’ cast by Mentorn  (makers of Question Time for the BBC).  We know that they tended not to live in cities, but in more ethnically homogeneous small towns and rural areas, and that they had fewer educational qualifications. But when looked at in qualitative detail – such as in journalist John Harris’s films made in places like Dorset, and Walsall – it is clear that, in common with the marchers on 20th October, they were people looking for answers, and not finding it in conventional political parties, or in the functioning of the political system. That some of them were persuaded to choose a bad answer doesn’t make them bad people, any more than having a higher degree, and earning diddly squat doesn’t make you part of the metropolitan elite.  We share a yearning for answers, and for leadership. That’s who most of ‘them’ are, and that’s who most of ‘us’ are.

The second question is more specific: where is Labour, what is it for?

On the People’s Vote march in June, as we moved into Whitehall the chant went up, “Where’s Jeremy Corbyn?”  Not this time.

Not this time, because Labour was irrelevant.  An absence. A party with fewer members than we had mobilised without organisational clout.  A party with no answers to our questions. They simply didn’t matter.  There were some branch banners on the march, and Another Europe Is Possible, and Left Unity (bless them and their great good humour), were very visible, and the Greens made a lot of very welcome noise.  That we walked alongside Lib Dems (midwives to Austerity which inarguably made Brexit happen), and anti-Brexit Tories did not matter.  While’ Jeremy’ was out meeting someone about Pinochet, I remembered (I paraphrase) something a Chilean political exile from from Pinochet’s regime said – “When democracy is under fatal attack, you see who really believes in democracy.  Some of your own side will desert you, and some of the other side will stand staunchly beside you.”  Because the heart of the matter is the principle.

Had Labour embraced a People’s Vote in June, it would have led that march, and owned this one  – and it would have had the Tories running for their political lives.  Instead they keep up their dreary non-position, which pleases no one, and languish in the polls against a Tory Party that is busily destroying itself.  This is why their absence didn’t matter yesterday.

What did matter yesterday were the conversations.  The questions – ‘What do you think will happen?’ ‘How do we get out of this?’ ‘Will there be a new party?’ ‘ ‘What happens next?’  And the answers – ‘We need a new constitution’, ‘change the voting system’, ‘restore fair access to the law.’  ‘let’s look at new local economic models’.

This is why we were walking on sunshine. 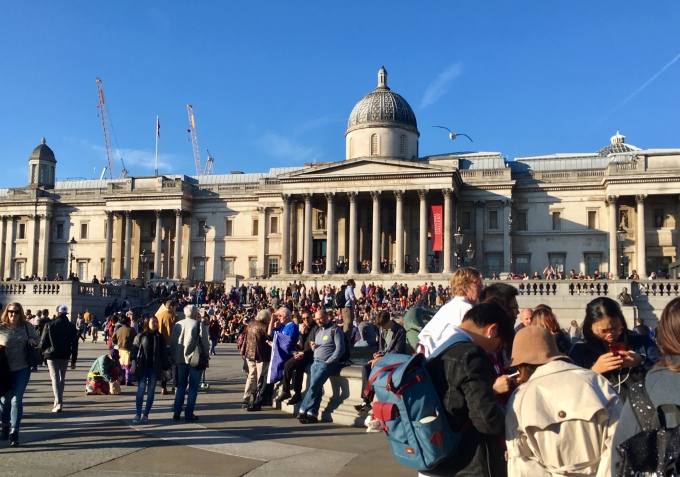