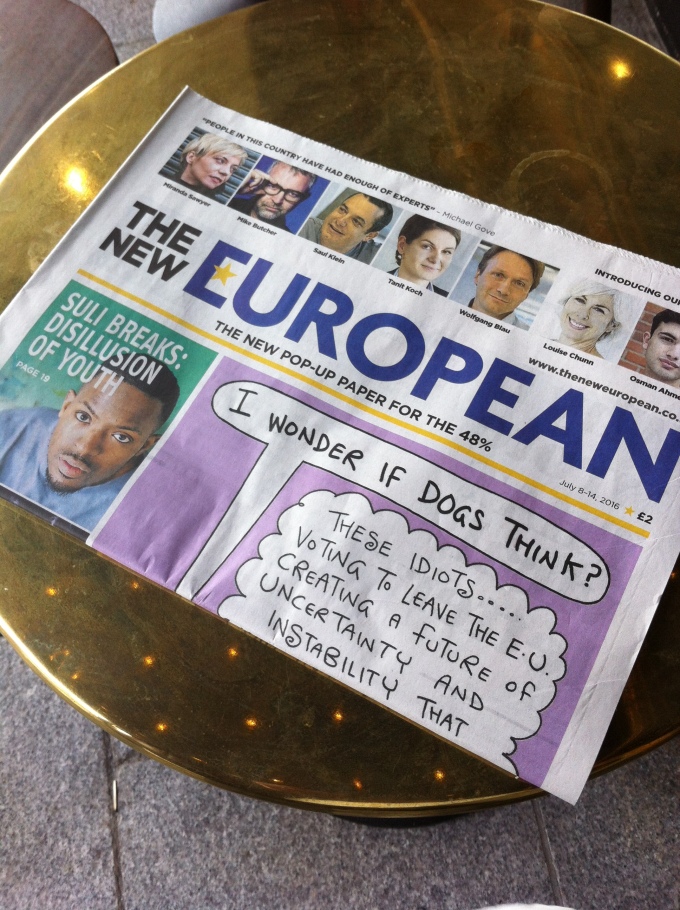 In the endless, overblown tragedy that is Brexit, one recurring theme is the fury of the Leavers.  Politicians warn of social unrest, of riots, of massive, perhaps uncontrollable social upheaval should Brexit not be “delivered”.  The gilets jaunes, we are told, will seem as nothing besides the mobilisations of Hi-Viz Hartlepudlians, or the fluorescent folk of Stoke.

Given the immense latent power of these people, the sturdy Leavers massed behind their leaders, the buccaneering Brexiteers, how come they have not, over the last nearly three years, shown the slightest inclination to rouse themselves in unvanquishable number? They will, if stopped by reporters in the precinct, speak with throaty certainty about their enduring love of this Brexit thing. Albeit in diminishing numbers, they will still phone the shock jocks where necessary. But on any objective assessment, these people seem to have a very weak commitment to the thing they claim to want.

What we don’t hear about is the wrath of the Remainers.

The 48%, their ranks now most likely now past the 50% mark, have been the ghosts at the Feast of Brexitmania. Unimportant, taken for granted, the ‘losers’ who must ‘suck it up’, have been largely absent from the minds of both politicians and media since 2016.  Their protests, their marches, have been shunned.  Their constant letters to MPs have been dismissed by means of the insolence of a House of Commons letterhead bearing a photocopied generic letter, digested read: “You don’t matter”.

It is very curious.

It’s curious because of who the Remainers are, and what they have done.  If the vile 2016 referendum has spawned any sort of social movement, this is it – the Remainers.

‘Remain’ sounds passive, which is misleading.  For the ranks of Remain are stuffed with the people who have always ‘done things’.  The people who volunteer, who sit as magistrates, who do public service, who run the little platoons of society, from local environmental protests, to allotment committees and book groups.  Some of these things may be self-interested, some may be busy-bodying, it scarcely matters what the motivation may be.  The point is simply that these Remainers are people who are not inclined to ‘suck it up’.

From the day of the referendum result in 2016, Remainers have gone into overdrive.  Forget the well-funded PR efforts of the London-oriented campaigns which grew out of the official Remain campaign.  The coordinated efforts by millions of friends and strangers who came together, at first to share outrage, but very quickly to organise and to campaign is probably unprecedented in British political history.  There are party, and non-party groups, local groups who take their mood boards and banners to High Streets across the country, and there are rooted, organic groups everywhere.

This spontaneous form of activism has taken place largely outside traditional party, or trades union structures, and often in the teeth of hostility from those organisations.  It is a movement without buildings, a movement effectively without leaders, though it has its celebrities and its thinkers, as well as its own newspaper.  How can it be that such a movement is all but invisible in formal public life, and scarcely acknowledged by elected politicians?

Not that it matters.  For the power of the Remainer Movement will not dissipate after ‘Brexit’ is done, whether we leave the European Union or not.

We have been put through nearly three years of hell by the tiny clutch of right-wing obsessives and xenophobes who drove the duplicitous, divisive, and, we now know, fraudulent Leave campaign.  Listen to Remainers describe the agony they feel each day, the sick feeling in the pit of the stomach, at the destruction that this whole disreputable semi-coup has wrought.  We have watched our country become a third rate Mr Bean tribute act on the world stage.  Our credibility has shrunk even faster than our currency. And meanwhile people continue to try to run businesses when they don’t know what the rules will be in a month, they try to plan working lives that cross borders without a clue as to whether they can still work, or travel, or even live with their model, multinational families.  Three years of wholly unnecessary chaos.  We do not, will not forgive any of this.

There will be no Remain riots. 700,000 of us can march through London with scarcely a need for a police presence.  But do not mistake our good manners for passivity.

The people who did this to our country, and to our neighbours, will be held to account. Public inquiry, constitutional crimes tribunal, who yet knows that method will be used to examine the Brexiters’  motives, and to detail their offences against the country.  Only one thing is sure.  We will pursue justice.

There will be a reckoning.

One thought on “Beware the Wrath of the Remainers”