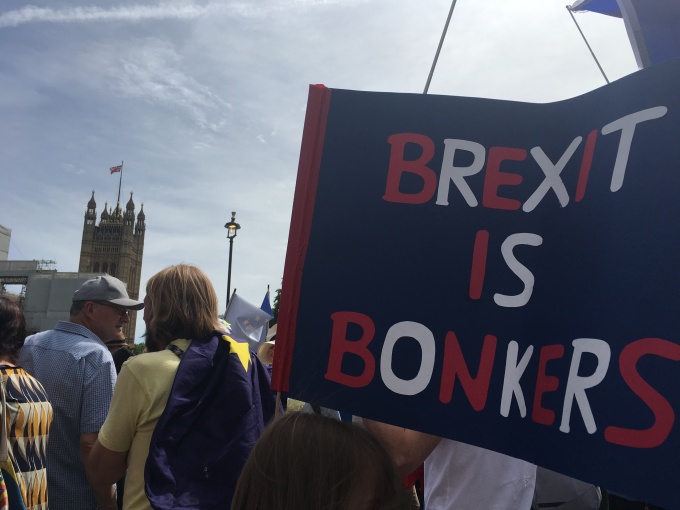 We are nearing the end of Brexit. This is not a prediction that we will hurtle over the looming cliff edge on the 31st October, as desired by a shrinking band of fanatics. We may do so, of course, and equally we may not. But whatever happens, Brexit is breathing its last.

Alas, that doesn’t mean that Brexit will, as most of the general public appear to want, ‘go away’. The calls to “just get on with it,” that politicians and the media report, simply express exasperation, rather than any desire for Brexit to be ‘done’, other than in the sense of ‘over’. The waves of Brexity sewage washing through British politics will go on, perhaps for a decade or more. But Brexit itself has lost its political force.

Take the evidence. Forget tales of dodgy money, foreign interference, lies on buses. All those things happened, but they alone didn’t drive the 2016 vote. The fact that there was a high turnout, including the mobilisation of a sizeable group of people who didn’t normally vote, was stunning. 52% of the voting electorate did back Brexit. We don’t know all the reasons why, and we don’t know what they then thought they were voting for, but it was impressive.

Remainers found it difficult to know how to respond. There was a democratic dilemma. We knew that the decision was ‘wrong’, in the sense of being bad on every level, politically, economically, socially. It fuelled division and hate crime, it crashed the currency, is driving job losses, and it is badly weakening Britain on the world stage. But as Brexiters still plaintively say, ‘We had a vote….’

Hence the swift rise of the movement for another referendum. As fastidious democrats, we felt the need to seek the legitimacy that comes from adding more voting to the mix.

It was an argument that suited the immediate situation after the 2016 vote. ‘Now we know more….’ we said. It wasn’t the strongest of positions, given that most Remainers distrust plebiscites, but it seemed like the best means of correcting the mistake the country had made.

But times have changed. The 2019 European Parliament elections show that clearly. The Brexit Party, a limited company, not a party, but somehow licensed by the Electoral Commission to stand in the election, ‘won’ the biggest proportion of the vote of any party, much like UKIP had done four years earlier. But unlike 2016, they achieved their ‘victory’ without massively driving up turnout. They are no longer riding a surge. There is a sense of the tide now going out on Brexit.

Polling shows it, too. It would be a mistake to say that there is a massive movement of public opinion away from Brexit. Rather, the (false) hope and optimism of their successful 2016 campaign has been replaced, as pollsters BritainThinks reported last week, by pessimism, gloom, and a loss of confidence in politicians. There is no Brexit movement of any significance now, just a 100,600 or so Tories and subscribers to Farage’s company (with significant overlap between the two groups).

Moreover, few Brexiters make any great claims for their project any more. They manufacture fresh slogans all the time, but the potency of the new ones is weakening. ‘Let’s give £350,000,000 a week to the NHS!’ was pretty bold, and racily populist. ‘We’ll be fine on WTO terms’, or ‘GATT Article 24,’ simply don’t compare.

It all has the feel of a deflating balloon. The thrill is gone. That Brexit persists as a padlock upon British politics, preventing us from doing anything more productive is obviously a huge problem, but it isn’t the insurgency it once seemed to be.

The sensible end to Brexit will be for opposition political parties to commit to a platform of revoking Article 50.

The stupid end to Brexit will be for a new Tory leader to find a way to leave the EU.

Either way, it’s the end of Brexit. It’s dying before our eyes.